Generally there are two types of yarn spinning systems are used in cotton spinning. Ring spinning and Rotor or open end spinning. 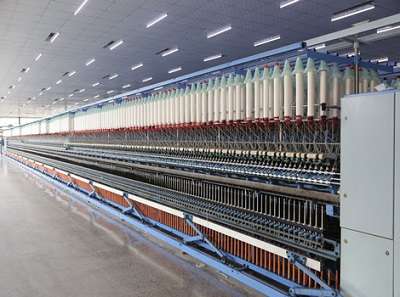 Ring Spinning yarn is made by twisting and thinning the cotton strands to make a very fine, strong, soft rope of cotton fibers. Most yarns made from staple fibers are ring spinning yarns. The twist that provides the final entanglement is built up from the outside to the inside. Although a high quality ring yarn first appears to be as uniform as a filament, closer microscopic examination would reveal a uniform helical arrangement of fibers at the surface, as shown in Figure 2. Ring spinning yarns are more durable and last longer than their regular counterparts, but will also be more expensive, too.

Tensile properties: Elongation and breaking strength are two important quality attributes of any spinning yarn. The strength of a staple yarn is determined by various fiber properties, the yarn structural geometry and the spinning parameters.

Hairiness: Hairiness is a property which indicates the amount and length of fiber ends and loops protruding from the body of the yarn. It is a desirable property in certain situations and undesirable in other circumstances, depending upon the type of end-use and application of the resultant fabric.

Fiber factors: Although several experimental investigations concerning the strength and elongation of staple yarns have been reported in the literature, it is important to know the order in which the fiber and other parameters affect yarn strength, so that appropriate attention may be paid to these factors during the selection of the raw materials and processing parameters. Usually the strength translation efficiency from fiber to yarn is 40–65%.

Yarn hairiness is another important quality attribute affected by the fiber parameters. Fiber fineness has the maximum influence on the hairiness, and is followed by fiber length.

Yarn factors: As the linear density of a yarn is reduced, the yarn strength is also reduced because of the lower number of fibers in the yarn cross-section.

The ring spinning system can be used to produce very coarse to extremely fine yarns with a very large range of twist density from various types of fibers and their blends. Ring spinning yarns can therefore be engineered to impart the desired hand, e.g. crispness or softness, to a fabric according to requirements. Ring spinning yarns are widely used for shirts, trousers, lingerie, nightwear, blouses, overalls, suits, skirts, sheeting, curtaining and other industrial textiles.

Fiber parameters: The choice of raw material plays a dominant role in controlling yarn quality in rotor spinning. There is a general consensus of opinion that the raw material properties must be ranked in a different order of importance for rotor spinning than for ring spinning.

Sliver quality: The quality of feed sliver in terms of cleanliness, uniformity and orientation of fibers has a profound influence on end breaks in rotor spinning and consequently on the rotor yarn properties such as strength and irregularity. Sliver variations cause an uneven flow of fibers through the transport duct and their subsequent deposition in the rotor groove, which, in turn, results in yarn count variation and poor spinning performance.

It is important to maintain high fiber orientation in the drafted sliver, since this leads to a more ordered arrangement of fibers in the rotor groove, which facilitates easy flow of twist along the rotor periphery and improves spinning stability and yarn strength.

Rotor machine variables: While producing thick sliver, the question of high total draft inevitably crops up. Increasing total spinning draft leads to an increased end-breakage rate and deterioration in the tenacity, breaking elongation and uniformity of the spinning yarn. The opening roller is a key parameter influencing rotor spinning yarn characteristics. It individualizes the fibers and thereby assists in feeding them to the rotor.

Rotor spinning can be employed to spin good quality yarns of 18–200 tex from cotton, polyester blends, viscose rayon and acrylic fibers. From microfibers, it is now quite possible to spin yarns down to 10 tex. The products for which rotor spinning yarns are considered particularly suitable include dress materials, denim and jeans, sheeting, leisure wear, industrial wear, interlining, towels, furnishings and warp knits.